Rumors go around of more traffic restrictions in Beijing as well as road fees to enter the center of the city (“congestion fees”). Another much more controversial plan – being carried out – is to simply lower the city population by making life difficult and expensive for migrants. In my opinion, unsustainable as it is chasing away all the people providing services.

In July China Daily also published the sources of PM2.5 in Beijing, Tianjin and Hebei: 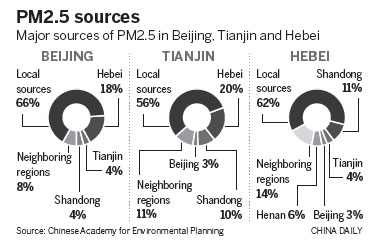 That is in line with my assessment that pollution in Beijing is roughly: one third cars / one third local industry / one third coming from the outside.
Coordination between areas has grown into a major issue in the fight against air pollution, especially in the Beijing-Tianjin-Hebei region.
Beijing has set an air pollution reduction target for PM2.5 at 60 micrograms per cubic meter by 2017. The city averaged 80.9 micrograms in 2015, suggesting the target will be hard to reach.
See the full article here:
12 July 2016 – Lots of bad air blows in from elsewhere
China Daily article

Beijing now has 68,000 public bicycles, and some new models. The city has also launched an app to provide real-time location data, nearby rental stations, number of available bikes etc. The rental bikes were launched in 2012 and I see more and more on the road.