Green growth through wind and solar

After a boom in China, installing more wind and solar farms than anywhere else, China is reducing the pace of growth in an industry that has helped lower the costs of green energy worldwide.
There is a need to consolidate the industry, clean out the weaklings and improve the grid. Overall China will forge ahead.
See the original and complete article:
China to Slow Green Growth for First Time After Record Boom – 23 September 2016

Installations of new wind and solar farms are expected to drop 11% in 2017 from a record high in 2016.
China’s electricity demand is stagnating along with a pause in the nation’s economic expansion. The government has started re-calibrating subsidies for the business, a move that’s likely to hit the industry’s leading manufacturers, Xinjiang Goldwind Science & Technology Co. and Trina Solar Ltd.
China has been the single largest developer of the technology for eight years. Its demand for panels and turbines has pushed manufacturers to build factories throughout Asia, and the scale of its projects helped bring down the cost of electricity from low-polluting sources everywhere.
China’s wind and solar capacity will grow 41.8 GW in 2017, down from a record 46.9 GW in 2016.
I also believe that In the long run, there is no question where China is headed: China is committed to a low-carbon future.

Consolidation in wind and solar

Based largely in China, the solar manufacturing industry, has been opening new factories in Asia and elsewhere. Now the market is bracing for a glut, pressuring companies to cut prices and often leading to a merciless cut-out-the-weakest.
China needs to digest the wind and solar plants and connect those properly to the grid. A large percentage of the generated power is lost as the grid cannot or does not want to absorb it.

There is a new trend few have noticed in China: the government is now heavily promoting both wind and especially solar farms that are able to deliver 24/24 with storage capacities. That will be the technology of the future. I know some manufacturers of thermal solar who are doing brisk business as they deliver solar plants with storage, producing power in a more grid-friendly way.
The grid problems experienced in China are also becoming an issue in some European countries.

China and USA wind and solar 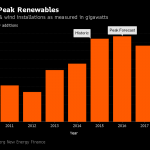 Solar and wind in China 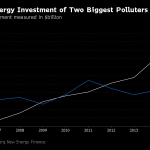 Solar and wind: China vs USA

Once again, those who criticize China on its generation modes should have a better look.