The Embassy of Canada organized another “Canada in Conversation” event on the viability of carbon capture and storage. The seminar was chaired by Ms. Cindy Termorshuizen, Chargé d’Affaires of the Embassy.
It took place on 22 September 2016 at the Embassy.
The Saskatchewan Premier Brad Wall gave a keynote address and participated in a panel discussion featuring Mike Monea, SaskPower’s President of Carbon Capture and Storage Initiatives, along with Chinese experts, chaired by Ms. Xu Qinhua of Renmin University.
A networking reception at the Official Residence followed the panel discussion.

Background on carbon capture and storage

Coal is an energy source that generates about 40% of the world’s electricity and about 25% of its greenhouse gas (GHG) emissions. As global population increases and developing countries continue to industrialize and increase their standard of living, carbon dioxide (CO2) emissions will continue to rise. It is critical to find ways to reduce GHGs and mitigate the impacts of climate change, while ensuring sustainable economic growth.

One key option for the near term is carbon capture and storage (CCS), a technology that can capture, transport and safely store up to 90% of the CO2 emissions produced from coal and other fossil fuels in electricity generation and industrial processes – and stop it from entering the atmosphere.

Current CCS projects underway in the province of Saskatchewan, including the world’s first post-combustion coal-fired CCS project integrated with a power station, are positioning Canada as a global leader in turning the corner on climate change and developing clean technologies that recognize dependencies on energy derived from fossil fuels.

See the introduction of the event: 160922-canada-invitation

See here the previous session I had attended:
Embassy of Canada: a view on the Arctic:
https://www.unirizon.com/2015/03/19/embassy-of-canada-a-view-on-the-arctic/

The presentation was pretty convincing, many like me are not always convinced underground storage works, the CO2 does not filter back to the service and it is economically doable.
Of course the Canadian project has some great advantages to make it work. They sell the gas to oil companies – who pay money – so they can use it to maximize oil recovery from their wells. And as Mike Monea explained, the oil wells work as perfect seals to keep the gas underground. Only a rather small part of the carbon is stored by the power plant.
There was a great interest from the Chinese side: I was one of the very few “foreigners” in the audience. 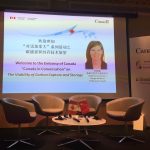 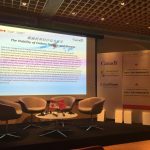 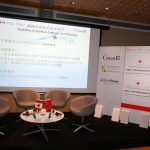 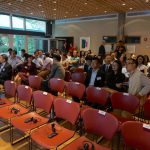 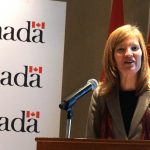 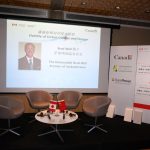 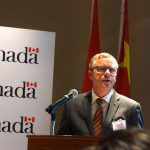 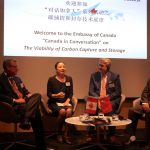 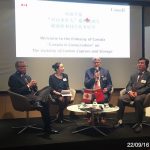 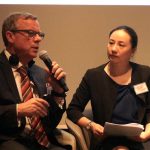 Details on the carbon capture and storage project

The full report:
‘IEAGHG, “Integrated Carbon Capture and Storage Project at SaskPower’s Boundary Dam Power Station”, 2015/0 , August 2015’
The full report was given to all participants received during the seminar: (85.3 MB):
IEA GHG_BoundaryDamReport_English.pdf

Details of the power plant:
http://www.saskpowerccs.com/ccs-projects/boundary-dam-carbon-capture-project/