Today I was watching TV5 and saw a documentary “hidden camera” about women not allowed in public. It showed how in several neighborhoods in France women are unwelcome to walk in the street, especially if they are in a skirt and with make-up. They are also barred from cafés to have a coffee, where it is men only. The journalists had to stop at times as it became too dangerous.
I could not find back a link to this program, a pity because it is very well done.
Those women who dare come out are ejected. harassed and insulted. Obviously the neighborhoods are Muslim. The men say the women should stay at home.

Not only in France

This reality is often downplayed by the politicians and some naïve “human rights” people (in this respect they are a joke). It also happens in Belgium, especially in Brussels.
See: “Salope, pute, pétasse”: c’est dur d’être une femme en rue à Bruxelles (won’t translate those ugly words):
http://www.rtbf.be/info/regions/detail_salope-pute-petasse-c-est-dur-d-etre-une-femme-de-la-rue-a-bruxelles?id=7810997

It shows the breakdown of our Western society but also explains why politicians like Marine Le Pen are coming up strongly while their policies are often rejected (as by me) for being simply racist.
If those “foreigners” (who often have a French or Belgian passport!) cannot accept our society and cannot show mutual respect and tolerance, they should leave.
They don’t belong.

Definition according to Wikipedia:

Misogyny is the hatred of, contempt for, or prejudice against women or girls. Misogyny can be manifested in numerous ways, including social exclusion, sex discrimination, hostility, androcentrism, patriarchy, male privilege, belittling of women, violence against women, and sexual objectification. Misogyny can occasionally be found within sacred texts of religions and mythologies, and various influential Western philosophers and thinkers have been described as misogynistic.

Obviously this is all unacceptable in our Western world. 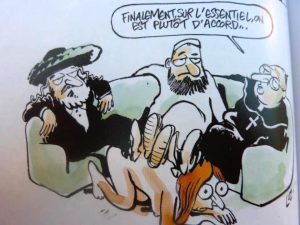 (translation: Finally, about the the main issue, we are rather agreeing)
Some religions seem anti-women, but that mostly applies to the extremists; fortunately many religious people reject this discrimination, so we should not generalize.