I am not sure who first came up with that word to describe Beijing super smog. Here one of the many articles:
http://www.businessinsider.com/china-airpocalypse-smog-photos-2016-12/#chinas-smog-problem-has-reached-red-alert-the-highest-level-in-chinas-four-tiered-pollution-warning-system-1
Photos of China’s ‘Airpocalypse’ — where industrial smog makes the country a living hell for half a billion people, by Louise Liu, Business Insider, 22 December 2016 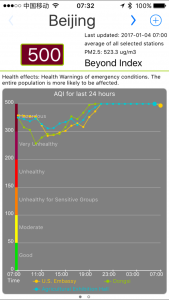 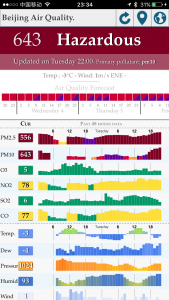 Indeed, Beijing has in the past weeks seen some real horrible pollution. “The thick, toxic air has caused flights to be canceled, classes to be suspended, and alerts to be issued by the government encouraging people to insulate themselves from air. Under a charcoal-tinted sky and toxic fumes, half a billion people can’t live or step outside without wearing masks.”

And it came up all of a sudden

On 2 January I jumped on my bike to meet a friend for lunch. I checked the AQI, it looked good so I did not take a mask. That was a mistake. 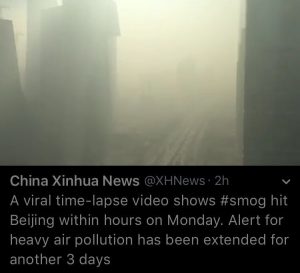 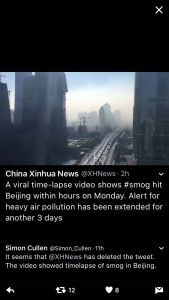 As shown in these images and video it came as in a horror movie.

The time-lapse video shows Beijing swamped by a tide of smog. The video, just 12 seconds long, shows smog descending on the 3rd Ring Road over a 20 minutes period, towards the CCTV Tower and other buildings. The video circulated all over the world. It was by taken by Chas Pope, a British worker, that very day.

What about the masks?

To face the Beijing super smog, in-house I use my air filtering machines, outside my choice of 3M masks. 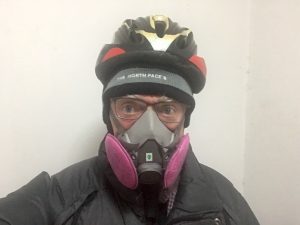 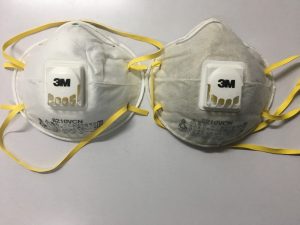 See how black the disposables become after some days. Time for a new one.
I now basically only use 3M, the ‘chemical war type” for heavy duty and the disposable one (pretty cheap like 10 RMB) for “normal” use. Both work well on the bicycle (one has to breathe!).
There are other masks of course, see here one “guide” (I stick to mine!):

Beijing announced stricter emission standards for cars to improve air quality. Starting on 15 December 2016 gasoline cars with National I and II emission standards are banned from the road when the city has an orange or red air-quality alert. Furthermore, those cars will be banned from the road from Monday to Friday starting on 15 February 2017. The number of cars with National I and II emission standards make up 8% of the cars registered in Beijing, but the emissions from those cars account for more than 30% of all emissions.
Also, soon cars older than ten years will be banned from the “center” (inside 5th ring road).
As far as the insiders tell me: cars from outside the 5th ring road might be simply all face serious restrictions (new number plates coming?!).